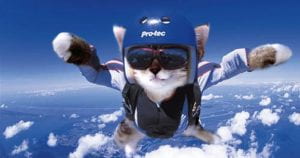 In science we learned about parachuting cats in Borneo. It talk about how a deadly virus spread called malaria. The people of Borneo call the the W.H.O ( World Health Organization). The W.H.O decided to spray DDT around the island,it helped for a little bit but then peoples houses fell down. Apparently the DDT also killed a parasitic wasp that was controlling the amount of thatch eating caterpillars. Not only did the DDT effected wasps and mosquito’s it also effected the other bugs that were eaten by the gecko. The geckos could handle the DDT but the cats could not and they died.That increased the rat population therefore infesting the island with rats. So the W.H.O decided to parachute cats into Borneo. After we heard all about that we  had to draw a chain reactions leading up to the parachuting cats in Borneo. I learned that some of the most crazy stuff can be for the greater good. It was satisfying to know all of the things leading up to the parachuting cats. I think I participated very well. I do not think i would have done anything differently. I wonder how they parachuted the cats. I wonder what it was like for the people in Borneo. I wonder if they had to evacuate the island.

One thought on “parachuting cats in Borneo”