Ijen ( a volcano in Indonesia) is seen at night with blue streams going  down the sides of it. Many people say that it is lava, but that is not the case. The glow is actually from the light of sulfuric gases. These gases come out of the crevices of the volcano and when the oxygen and the gases meet they ignite a flame. The flames can go as high as sixteen feet!! Some gases condense into liquid forms which allows them to be on fire as they flow down the mountain.

I choose this article because i like all the science behind this national park. i like how the people who wrote this didn’t just say it was blue lava, but actually gave me the facts. i wonder if by swapping a chemical out for another in the sulfur we could to turn the fire black or clear. i wonder if the fire has ever fell on somebody. i wonder if a animal could adapt to be able to drink the fire. 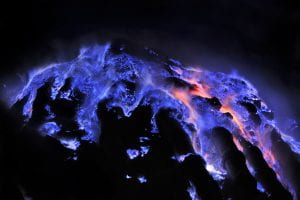